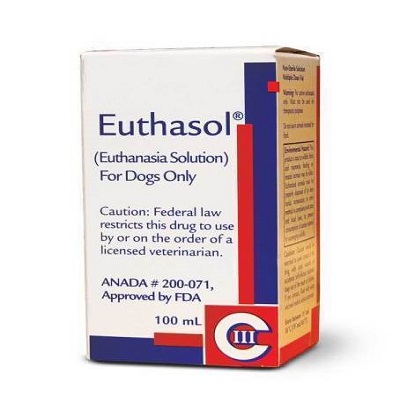 Each bottle of 100ml

Euthasol Online – A non-sterile solution containing pentobarbital sodium and phenytoin sodium as the active ingredients. Rhodamine B, a bluish-red fluorescent dye, is included in the formulation to help distinguish it from parenteral drugs intended for therapeutic use. Although the solution is not sterile, benzyl alcohol, a bacteriostat, is included to retard the growth of microorganisms.

ACTIONS: EUTHASOL (pentobarbital sodium and phenytoin sodium) contains two active ingredients which are chemically compatible but pharmacologically different. Each ingredient acts in such a manner so as to cause humane, painless, and rapid euthanasia. Euthanasia is due to cerebral death in conjunction with respiratory arrest and circulatory collapse. Cerebral death occurs prior to the cessation of cardiac activity.

When administered intravenously, pentobarbital sodium produces rapid anesthetic action. There is a smooth and rapid onset of unconsciousness. At the lethal dose, there is depression of vital medullary respiratory and vasomotor centers.

Pharmacodynamic Activity: The sequence of events leading to humane, painless, and rapid euthanasia following the intravenous injection of EUTHASOL is similar to that following intravenous injection of pentobarbital sodium, or other barbituric acid derivatives. Within seconds, unconsciousness is induced with simultaneous collapse of the dog. This stage rapidly progresses to deep anesthesia with concomitant reduction in the blood pressure. A few seconds later, breathing stops, due to depression of the medullary respiratory center; encephalographic activity becomes isoelectric, indicating cerebral death; and then cardiac activity ceases.

Phenytoin sodium exerts its effect during the deep anesthesia stage caused by the pentobarbital sodium. This ingredient, due to its cardiotoxic properties, hastens the stoppage of electrical activity in the heart.

For use in dogs for humane, painless, and rapid euthanasia.

WARNING: For canine euthanasia only. Must not be used for therapeutic purposes. Do not use in animals intended for food.

ENVIRONMENTAL HAZARD: This product is toxic to wildlife. Birds and mammals feeding on treated animals may be killed. Euthanized animals must be properly disposed of by deep burial, incineration, or other method in compliance with state and local laws, to prevent consumption of carcass material by scavenging wildlife.